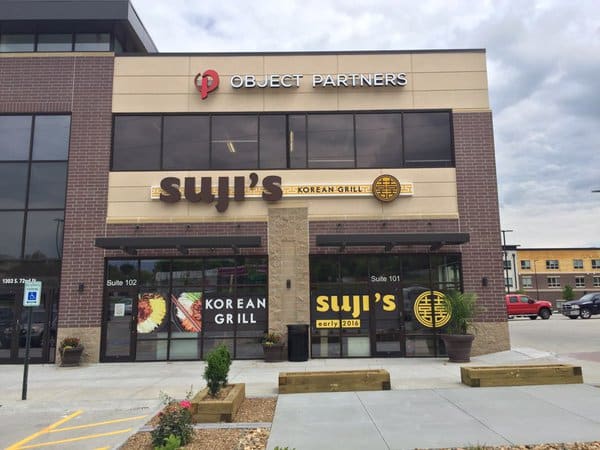 Suji’s Korean Grill, a new fast-casual restaurant serving modern Korean food, has opened for business in Omaha, Nebraska, at Aksarben Center located at 1303 South 72nd Street. The restaurant is the first in a proposed chain under the Suji’s brand, which already is introducing Americans to prepared Korean meals, entrees, and sauces under the Suji’s Korean Cuisine label at retailers including Costco, Whole Foods, Target, and H.E.B Grocers.

The restaurant is the brainchild of entrepreneur Suji Park, who has launched and established American-themed restaurants in Seoul and Tokyo, and now is introducing her native Korean food to the U.S. Suji’s Korean Grill will be led by CEO Matt Hollenbeck, a 25-year industry veteran formerly associated with Starbucks Coffee and Panera Bread.

“This is an incredible opportunity to build a global brand from the ground up,” Hollenbeck says. “What most appealed to me is that our concept will be introducing modern Korean flavors in a fast-casual setting. The atmosphere is upscale, yet offers a familiar service style with freshly prepared ingredients used to create customizable, made-to-order meals. In addition to great tasting food, Suji’s also offers a variety of local craft beer and flavorful Korean soju cocktails to complement any meal.”

The restaurant held a soft opening June 30, for “friends and family” and hosted a fundraiser that evening to benefit the Food Bank for the Heartland, with all of the proceeds donated to the non-profit. A grand opening and ribbon cutting ceremony with Mayor Jean Stothert will take placeon July 22 to celebrate Omaha’s newest Korean restaurant, the first to offer modern Korean cuisine in this style.

Hollenbeck says the menu was designed to allow guests to create healthy, flavorful meals, with all natural ingredients and scarcely containing gluten. While Korean food is known for its complex, spicy flavor profile, the guests at SKG can select from savory or spicy seasoning to customize each meal according to their own taste preference.

According to Hollenbeck, plans are in the works to open a New York City-based restaurant in the coming year.

“We absolutely view this as the start of an international brand, with a presence planned in cities such as New York, Washington D.C., London, and Tokyo,” he says. “We already have begun considering locations in Manhattan.”