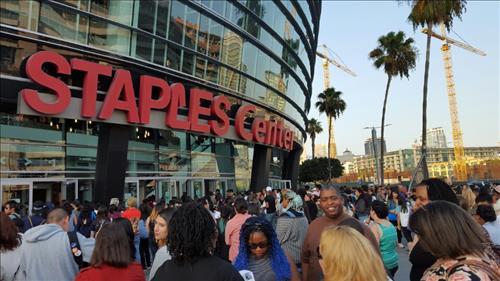 [The Korea Times US] LOS ANGELES, Aug. 2 (Yonhap) — A global K-pop festival in Los Angeles has brought together local fans, going beyond race, age group and gender, creating a giant melting pot of music lovers who danced and sang along with the artists from the other side of the globe.

Tears filled up the eyes of female fans when South Korean star actor Lee Min-ho showed up in the cultural event. The celebrity is one of the icons of “hallyu,” or the global spread of Korean pop culture.

A group of Caucasian male fans hopped merrily while Korean girl groups IOI and GFriend staged adorable performances. Girls rallied as boy bands Block B and SHINee exploded onto the stage, while some middle-aged women sang along to the songs of Turbo, a group from the late 1990s.

At a glance, the scene was quite similar to major K-pop events in South Korea, except for the highly diverse audience of the city of angels — a blend of Caucasians, African-Americans, Hispanics, Asians and Middle Easterners.

Even hours before the K-pop concerts began, visitors formed a long line around the Staples Center, where KCON 2016 LA took place. Some drove to LA from the Great Plains, some flew from New York. The tickets sold out fast, including the three-day free passes, as pricy as about $900 per adult. Some K-pop lovers save up money for the tickets, according to the officials of CJ Entertainment, the event’s organizer.

In addition to the K-pop concerts, local visitors enjoyed fun cultural activities, including the virtual reality showcase, in which they took photos with virtual images of their favorite South Korean stars and performed K-pop idol dance moves.

K-food trucks also hailed them with some of the most popular Korean food in the U.S. — bibimbap, or a rice bowl with vegetables and red pepper sauce, and bulgogi, or Korean-style barbecue.

The scale and popularity of KCON has grown fast. The first KCON event in Irvine, California, in 2012 attracted only 10,000 spectators. In 2016, CJ Entertainment aims to draw 200,000 visitors to seven KCON events in major cities around the world, such as Abu Dhabi, Paris, Tokyo, New York and Los Angeles.

From 2020 and on, the South Korean entertainment giant plans to hold at least 10 rounds of the KCON for a minimum of 400,000 visitors.

Besides spectators, this year’s cultural festival has drawn a number of SME marketers and self-employed creators. Both KCON Japan 2016 in April and KCON Paris 2016 in June drew some 40 corporate participants. In the latest LA run, KCON drew about 90 SMEs to take part in the Korean content convention.

CJ Entertainment expected that KCON will attract a rising number of millennials, who are potential consumers of Korean culture and products as they are fast to set and adopt new trends.

“The fifth and latest run of this year’s KCON in LA has shown us the growth potential of hallyu culture as the future mainstream trend in the global scene,” a CJ Entertainment official said. “We take pride in arranging events that the whole world can come together and enjoy.”

<Featured Image: This photo, released courtesy of CJ Entertainment, shows U.S. fans of Korean pop music lining up outside the Staples Center in Irvine for KCON 2016 LA, the Los Angeles leg of the world’s largest K-pop festival, held from July 29-31, 2016.>