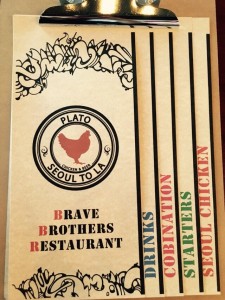 Korean crispy chicken and yangnyeom tongdak has getting popular. OB bear and Kyochon are the most famous Korean chicken restaurant. Now PLATO became one of them. Here is full article from Los Angeles Magazine.

According to review, it says “Something else you won’t find outside of Plato are the coconut butter wings (think coconut shrimp but in chicken form). The outside of the wings are doused in a coconut oil and coconut juice reduction, caramelized, and then topped with pineapples, slivers of nuts and raisins.”, also magazin says “Another highlight is their addictive soy garlic wings, which while also sweet, are one of the more savory offerings of all their wings. These ones are accompanied by slices of serrano peppers, giving it just a little kick.”