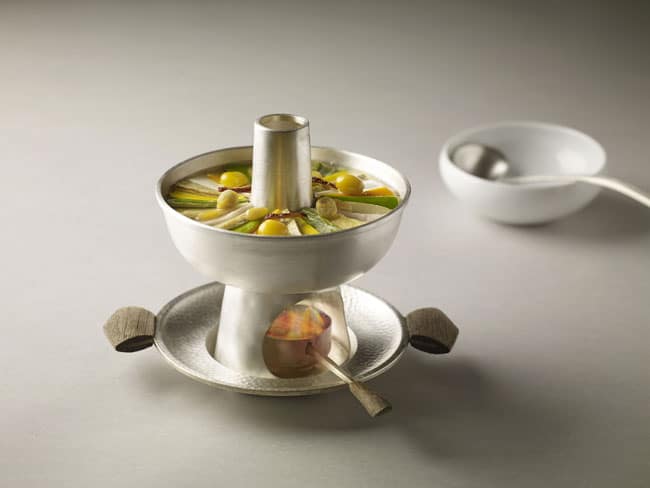 This is the fourth in a series of interviews with chefs at Michelin star-awarded restaurants in Korea ― ED.

It was 28 years ago that chef Kim Seong-il joined The Shilla Seoul as a new employee. At the time, right before the 1988 Olympics was held in Seoul, hotels were busy recruiting new staff in their restaurants to cater to the influx of foreign guests. That’s when chef Kim, now the chief of the culinary team of The Shilla Seoul’s Korean restaurant La Yeon, joined.

“I sent applications to several hotels at the time and was called in for interviews by many of them. But the dates were all at the same time, on the same day. I guess hotels purposefully did that to compete. So I was mulling over which interview to attend and my parents told me to go to Shilla because it’s part of the Samsung Group. That’s how I ended up here,” said Kim during an interview with The Korea Times.

“My parents were so proud of me working here. Before they passed away, they told me to stay as long as I could at this hotel. That was their will. I plan to live up to that wish.”

Since then Kim has worked at the same place for 28 years, putting in steady and ceaseless effort into his dishes. Those efforts were honored by Michelin on Nov. 7, with three shining stars as a symbol of excellence.Kim’s dream wasn’t to become a chef originally. He wanted to become a policeman or a soldier. But it didn’t work out as he had hoped. So, when his aunt from Australia invited him to live there, he was ready to leave. He acquired a certificate for Korean cuisine only to get an immigrant visa. But again, life didn’t work out as planned. His mother became seriously ill and his family told him off for only thinking about himself and his dreams so he decided to stay. That’s when he started looking for local jobs and applied to hotels.

“To chefs, the Michelin award is a huge honor. I would like to attribute the stars to the entire culinary team as well as other teams that collaborate with us such as the purchasing team, food and beverage team, planning, marketing and communications teams,” said Kim.

“It’s also thanks to our CEO’s investment into research and development of Korean cuisine. She didn’t hesitate to support our trips overseas to experience top notch services to use as benchmark. She also stressed the importance of authenticity in our food and to retain our tradition.”

Last year, the restaurant collaborated with the Kim family clan of Gwangsan to revive recipes from an age-old cook book called “Soo-eun-jap-bang” which dates back to 1540 in the Joseon Kingdom (1392-1910). The promotion ran for three days offering 10 representative dishes from the book.

“We benchmarked a lot from traditional Korean family clans and the promotion was part of that effort. At first we were doubtful whether we could reenact the recipe, but it was met with positive reviews,” he said.

La Yeon’s food is characterized as simple and mild.

“Our food focuses on simplicity and not adding fusion elements to it. I think being simple is best. In order to maximize the natural taste of the main ingredients, we must not add too many additional ingredients or seasonings. That’s why our foreign guests say our food is not burdensome because we don’t use strong spices. My philosophy is to keep the taste simple yet harmonious,” said Kim.

“It also needs to be consistent because this is a top quality hotel with many VIP guests. The gap in the level of chefs must not be wide. My goal is to level out the skills of my chefs so that the most junior and the most senior all can end up creating the same taste. A standardized procedure is important. We must provide the same standard whoever visits.”

“We had about 40 percent of foreign guests, which is still a high percentage, but after the Michelin award, it jumped to 50 percent. We get more calls from overseas and the first thing they tell us is ‘Congratulations.’ Our seats are fully booked until the end of December,” said Kim.

“Another different phenomenon is the increase in younger customers. Our usual customer age range was in the 40s to 50s group. Now customers in their 20s and 30s also come. I started inspecting the dining room every day since the Michelin announcement and it’s completely full, which was hardly the case before. They also feel grateful when I come out to say hello. But I feel even more grateful for them coming.”

Kim pushes his staff to study constantly, offering a study group session every week to introduce new learning and new dishes. Every week one chef is designated to make a presentation, either on what they have newly discovered through books or a new recipe they came up with.

“The realm of Korean cuisine is so large that we need to continuously research. I think the study session helps add a bit of tension because chefs here go through routine work. We have limits on creativity and mostly follow the standardized process. So I wanted to give my staff the opportunity to research and develop their skills,” said Kim.

“We try not to be too avant-garde with the recipes but to be mildly creative within the boundaries of tradition. Among those presented, some of them ― such as cold octopus salad and cod fish porridge for November ― have been introduced as part of our new menu.”