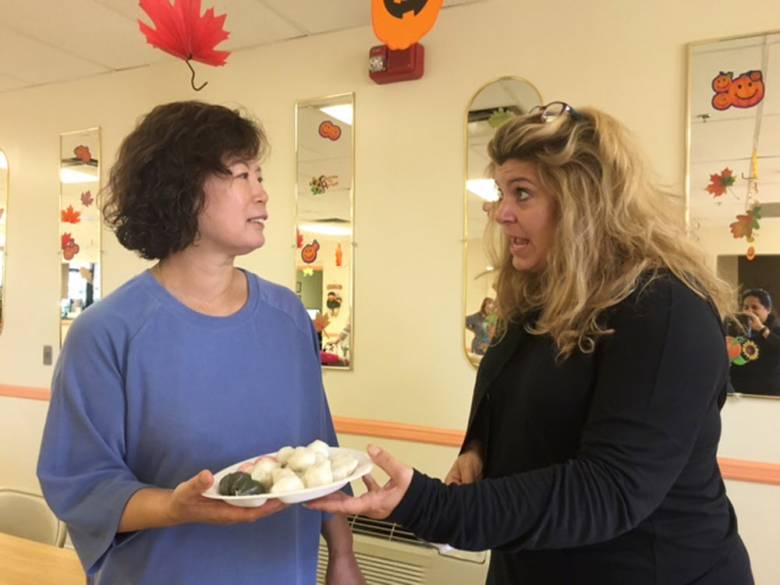 The annual celebration has been part of the center’s calendar for about 15 years, since residents of Korean ancestry began to take part in activities at the facility, said Heleyne Trent, the center’s director. Before that, Trent said, there was only one person of Korean heritage at the center, and now Koreans represent its largest ethnic group.

“Our Korean participants have been treating us to this occasion every year,’’ Trent told more than 40 seniors representing different backgrounds at the lunch event. “During Chuseok, they meet up with friends, with family members, they come together, and eat food and share stories.”

Chuseok is a three-day holiday in South Korea that this year began on Wednesday and ends Friday. The Harvest Moon Festival, as it is also called, is a day when most people in Korea visit family, prepare food and honor their ancestors. One of the holiday’s central traditions is the preparation and eating of song pyun, a Korean rice cake.

Trent said the sesame seed-filled rice cakes that were served on Thursday were brought by Korean participants.

The harvest festival is also celebrated in China, Vietnam and Taiwan.

David Kim, 78, who lives above the senior center in the Boiling Spring Gardens apartment building, said family members in South Korea reminded him on Thursday that it was Chuseok by sending text messages with pictures of rice cakes. He said it was nice to be able to celebrate the holiday at the senior center.
“Sometimes being here in the United States, we forget what the day is, but the center reminds us what day it is today,’’ Kim said. “Sometimes we get confused.”

Ellie Butler, who also lives in the building, said she enjoys the rice cakes that they serve every year for the Korean holiday, and that she appreciates her Korean neighbors and their traditions.

“When they have their holidays they share with us,’’ she said as she looked at the rice cakes. “These are delicious.”

Butler, 72, said she could always count on one of the Korean senior center participants to bring her walker to her when she’s ready to stand up. She said participants also paint her nails and cut her hair for a small fee.

“They are very conscious of their elders; they put their elders first where Americans put their children first, is my opinion,’’ she said “And they are helpful to me.”
Bergen County is home to about 58,000 residents of Korean ancestry, according to five-year estimates from the 2014 American Community Survey. They represent the largest Asian group in the county.

There were 4,359 residents of Korean ancestry living in those towns in 2010, according to the U.S. Census Bureau.

On Sept. 24 and 25, Overpeck County Park will be the site of a county-wide Chuseok festival organized by the Korean American Association of New Jersey, which is based in Palisades Park.

Sonny Kim, the vice president, said they expect about 70 to 80 businesses to participate, including food vendors that will serve traditional Korean cuisine. There will also have a concert featuring Dae-Soo Han, a folk and rock singer from South Korea, followed by K-pop singers.

“We are trying to recall the memories from the 80s and 90s; these singers were very famous singers back in the day,’’ said Kim, 47. “They were the famous singers when I was in high school and college.”

He said anyone who needs information about the festival can call the association at 201-954-9546.