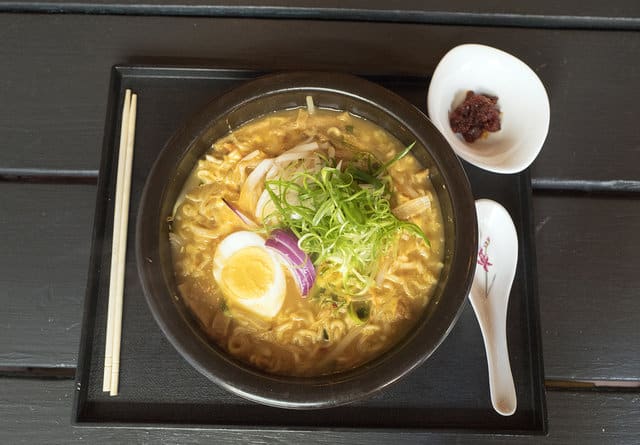 [Gothamist] A new restaurant extolling the virtues of eating while drinking—or is it the other way around?—is serving up piping hot bowls of cheese ramen, poke salad, and a boat load of wings to Clinton Street. WhaLES, which opened in early June, advertises itself as a Korean gastropub, a casual spot to sip cocktails while munching on Korean fried chicken. In Korea, you’ll call someone a “whale” if they’re dropping tons of cash—but the menu here is very heavy drinking, comfort food-eating friendly as far as prices go.

They’re specializing in the kinds of things that soak up alcohol well, like a simple but hearty Cheese Ramen ($7) with onions, bean sprouts and egg, a popular DIY soup one might make at home after hitting the bar. Korean Fried Chicken gets served up as wings, drumsticks or boneless Karage ($12), an excellent pairing with a cold beer or AGWA (a coca leaf liquor), especially during happy hour where drinks are half off.

Whether intentional for the gluten-free movement or just an appreciation of the versatility of rice, the grain is employed as a base for the Rice Pizza ($10) topped with a tuna, onion, paprika, corn and mozzarella cheese in a spicy sauce. It’s also part of the bun holding together the Rice Burger ($7), made with chicken or beef and topped with lettuce, tomato, onion, fried egg and a spicy mayo, all wrapped in edible soy paper.

There’s been a lot of turnover in the 71 Clinton Space in recent years, but so far the restaurant has been well received in an area saturated with options.