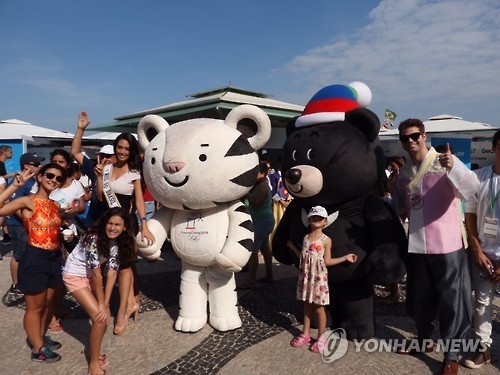 Korea has been working to boost the profile of its alpine city of PyeongChang to people around the world who have flocked to Rio de Janeiro for the ongoing Summer Olympics.
During the opening ceremony of a promotion center named the PyeongChang 2018 House in Rio, Korea’s culture minister Kim Jong-deok urged locals and tourists to meet again in the snowy fields of PyeongChang.

Hundreds of people watched a cultural performance that featured B-boy dancing, a demonstration of the traditional Korean martial art of taekwondo and Nanta, a long-running Korean non-verbal show.

Koreans also made big kimbap, a seaweed-wrapped rice roll filled with a variety of ingredients, to offer visitors a taste of Korean food.

Carlos Augusto Cardoso Gorito, a Brazilian who is well-known in South Korea for appearing on a Korean talk show, publicized the PyeongChang Winter Olympics by wearing “hanbok,” Korea’s traditional dress.

Gorito came to his hometown last week as a capacity of Public Relations Ambassador of Korea’s Gangwon Province to which PyeongChang is located.

He said he would like to publicize Korea and Gangwon Province to Brazilians through this promotion center.

Korea also set up an automata exhibition of Olympic venues and characters in 18 winter sports near the promotion center.

The Korean organizers said visitors can experience ski jumping through 4-D virtual reality, as well as Korean calligraphy and crafts using “hanji,” traditional Korean paper, at a booth inside the promotion center.

The Korean Tourism Organization, a government agency designed to promote Korean tourism, said the promotion center is popular among locals and tourists. (Yonhap)