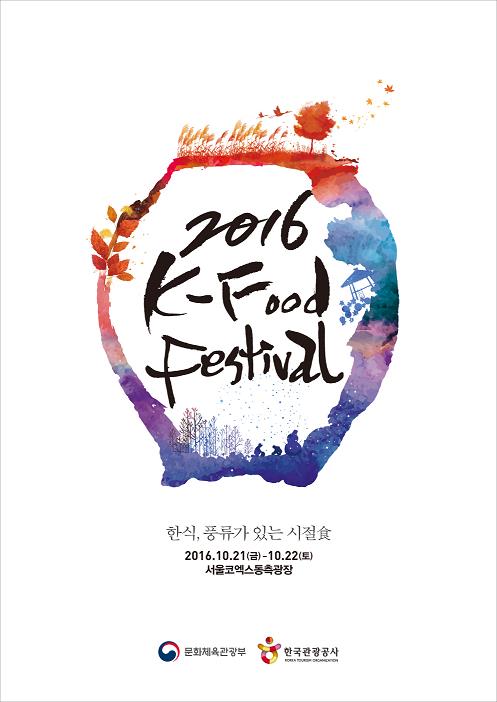 SEOUL, Oct. 21 (Yonhap) — A traditional Korean food festival kicked off on Friday to introduce the representative seasonal dishes which are essential to the Korean mind, body and soul.

The “2016 K-Food Festival” organized by the state-run Korea Tourism Organization (KTO) will continue through Saturday at the eastern square of COEX in southern Seoul with a variety of cultural and entertainment events.

The main theme of the second annual event is Korean traditional dishes served in 24 mini seasons (jeolgi) divided according to the lunar calendar, which is used for the observation of many Korean holidays.

The lunar calendar, based on the phases of the moon, includes 24 solar terms split into different seasons according to weather and climate. These lunar seasons serve as important indicators for agricultural cycles and other traditional rituals.

For example, Koreans eat five-grain rice and nuts to guard against boils on the first full moon day of the lunar year. On Dongji, the longest night of the year that falls on Dec. 21 or 22, people eat red bean porridge (patjuk). It is believed that the red color of the beans can expel devils and get rid of slight sickness.

“We hope the event can help both locals and foreigners better understand the traditional Korean food culture, and encourage foreign travelers to revisit Korea next time,” Seol Kyung-hee, a senior KTO official, said.

Special exhibitions will showcase the royal dining culture, with such dishes as sinseollo (royal hot pot) and gujeolpan (platter of nine delicacies) and many more.

This year’s event will also introduce cuisines from Gangwon Province in the run-up to the 2018 PyeongChang Winter Olympics, and North Korean dishes in hopes of bridging the cultural gap between the two Koreas.

Visitors will be able to taste samples of local delicacies and dishes and learn how to make traditional foods. A cooking studio will teach foreigners how to make fusion Korea food with a twist, and celebrity chef Lee Won-il, who specializes in Korean food, will host a “Korean cooking talk show” on Friday.