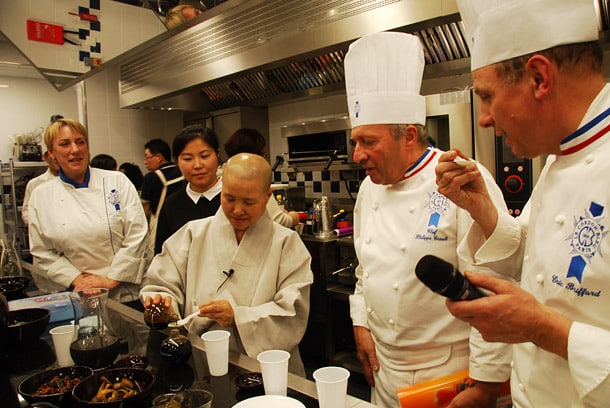 ‘When we prepare food n temples, we view nature and ourselves as one.’ – Venerable Seonje

Traditional Korean Buddhist cuisine, famous for its simplicity, is not usually seen as a trendy or hip food among young Koreans. But for a group of culinary students at the prestigious Le Cordon Bleu in France, it was a source of great excitement and curiosity.

Last week, the Venerable Jaseung, president of the Jogye Order of Korean Buddhism, and the order’s culture promotion team visited Paris to mark the 130th anniversary of diplomatic relations between Korea and France. As a part of the trip, the Venerable Seonje, a monk famous for temple cooking, visited the cooking academy to deliver a special lecture on Buddhist cuisine.

The event proved popular, with nearly a hundred students and professors packed into the standing-room-only lecture hall.

“This soy sauce has been matured for 20 years,” said the Venerable Seonje as she handed over samples of the sauce to students. “Try it.” As they smelled and tasted the sample, students savored the rich taste of the age-old soy sauce.

“I’ve tasted various kinds of soy sauce in Japan and China, but none were as tasty as this,” said Philippe Groult, assistant culinary arts director at Le Cordon Bleu. “For a second, I wondered if this really was soy sauce because it wasn’t salty at all. This was like a bottle of well-aged wine, a product of ancestors’ wisdom.”

The Venerable Seonje also introduced dishes like kimchi, stir-fried mushrooms and seasoned eggplants. As she began preparing the kimchi, she held up a head of cabbage and explained to students the spirit of Buddhist cuisine.

“People label these cabbages by price,” the monk said. “But in the world of Buddhism, we never distinguish food by price. This cabbage needed sun, soil, wind, water and the farmers’ efforts to grow into a vegetable this size. In other words, it was created through the power of the entire universe, which is why we need to respect food.”

The Venerable Seonje also emphasized that temples never throw away food, arguing that food was just like life created through the power of nature. Unlike people’s usual habit of eating only the tasty parts of a plant and throwing away the peels and roots, Buddhist cuisine emphasizes utilization of every part of the vegetable.

For many of the students, who come from various nations around the world, hearing about Korean Buddhist practices was new and refreshing.

“The part where she mentioned that they used every part of the ingredients was very impressive,” said a 28-year-old student at Le Cordon Bleu. “It gave me a chance to look back on how much time and effort is required for a vegetable to grow.”

“This is my first time trying out Korean food,” said a 30-year-old student from Poland. “I’m surprised that the spicy taste forms this remarkable harmony with fresh cabbage. I’m thinking of checking out one of the Korean restaurants in Paris.”

“If I were to choose three words to describe Korean Buddhist cuisine, they would be ‘fresh’, ‘healthy’ and ‘peaceful,’” said a 29-year-old student from Canada. “I find the philosophy behind these foods very appealing.”

“These days, cities like Paris and New York are following the trend of realizing an ingredients’ natural taste,” said Eric Briffard, head of the cuisine department at Le Cordon Bleu. “Good dishes are actually simple dishes.

“It’s quite easy to get what we want with money these days, but we can never buy happiness. If we compare that to food, seeking simplicity is what really brings us happiness. The spirit of Buddhist cuisine fits well with the modern trend.”

The Venerable Seonje concluded her lecture with a quote from Buddhist scripture. “When we prepare food in temples, we view nature and ourselves as one,” the monk said. “The Buddhist scriptures say, ‘Bees do not hurt the flowers when they collect honey from them.’ Buddhist cuisine goes along the same line. We cook using nature’s products but never hurt nature itself.”