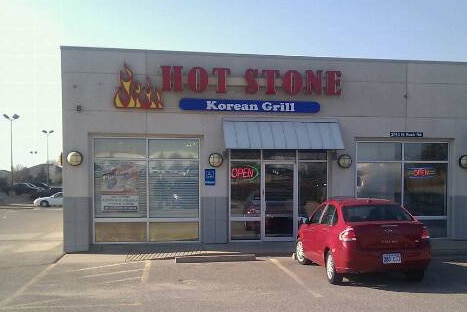 Amid the plethora of chain and trendy dining options on one of the east side’s most heavily traveled streets, there is a place where you can get your kimchi fix.

The menu at Hot Stone features among the best selections of Korean dishes in town yet also offers more choices. Appetizers include tempura shrimp and vegetables, a seaweed roll, egg rolls and Korean dumplings. Entrees are broken down into several main Korean dishes including bulgogi, kalbi and rice bowls. Each of these can be made with different meat, seafood or vegetable options. Other menu items include stews, spicy stir-fry dishes, fried rice and teriyaki entrees.

On our visit, we started out with fried mandu ($4.95), which is a Korean dumpling filled with ground meat and diced onion. The mandu wrap was expertly fried with a crispy exterior and chewy interior around a savory pork filling. A sweet dipping sauce was served alongside the mandu. For our main dishes we ordered shrimp bulgogi ($12.95), kimchi dolsot ($11.95) and teriyaki chicken ($11.95) for the kids. Each of our entrees came with traditional Korean sides of kimchi, pickled radishes and bean sprouts. The sides can be substituted if you do not wish to have kimchi.

Kimchi is a tangy mixture of cabbage, garlic, green onions and spices that have been allowed to ferment. Hot Stone’s version was served at room temperature, which allowed the bold flavors and subtle spiciness to come out. The meals also came with cups of miso soup, which our 1-year-old found delightful.

The shrimp bulgogi featured ample amounts of shrimp as well as sauteed peppers and onions in a sweet sauce. It was a decent dish, but not as good as other bulgogi we have had. The grilled teriyaki chicken was served thinly sliced and bathed in a sweet and savory sauce. A side of steamed rice helped to ensure that the extra teriyaki sauce did not go to waste. I was happy to note that the chicken was not overcooked and the sauce was not the congealed mess that sometimes plagues teriyaki dishes.

The best dish was the kimchi dolsot. This classic Korean staple came served in a searing hot stone bowl and consisted of steamed rice with liberal amounts of warm kimchi, bits of sweet-marinated pork, and green onion piled on top. Crispy bits of rice from the stone bowl and a splash of tangy gochujang chili sauce made the dolsot a delicious dish for those who like their food with a little spiciness.

Our service was friendly and quick, but as a large group arrived for a party, our waitress became busy with them.