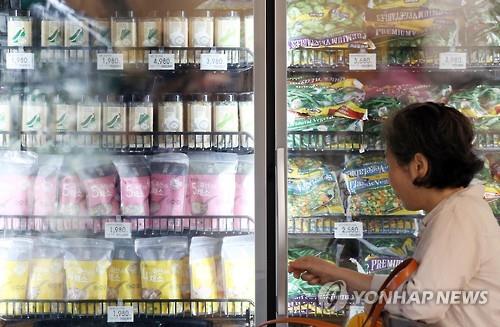 SEOUL, Aug. 5 (Yonhap) — Frozen foods are gaining huge popularity in South Korea thanks to a rise in the number of households with one to two members and a prolonged heat wave, industry data showed Friday.

Discount giant E-Mart said its sales of frozen alternative foods, including fried rice, rice with seasoned vegetables and noodles, jumped 75.8 percent in the January-July period from a year earlier.

Of its own convenience food brand, sales of frozen foods shot up 55 percent on-year during the same period, far exceeding the 16 percent gain in shipments of cold-storage foodstuffs.

Sales of frozen Korean foods surged 34 percent, with those of frozen pastas, pizzas and other foreign foods spiking 74 percent. Shipments of frozen desserts quadrupled during the period.

With the popularity of frozen foods rising sharply, food companies are scrambling to enter the fast growing market and offering a variety of products, including frozen vegetables, sandwiches and desserts, an E-Mart official said.

E-Mart saw sales of frozen vegetables jump roughly 16 times in the seven-month period from a year earlier. Buoyed by the stellar performance, the discount chain plans to set up frozen vegetable stands at 40 stores in the country’s major cities.

Discount stores are not alone. Sales of frozen foods at convenience stores are also on a sharp rise.

The convenience store chain GS 25, run by GS Group, saw sales of frozen foods soar 28.4 percent in July from a year earlier. GS 25 also said its frozen fruits are selling like hot cakes, with 2.5 million frozen mango sticks and pineapple bars sold in the first seven months of the year, compared with 3.1 million sold for all of last year.

“On top of ice, ice cream and drinks, frozen foods are popular amid a prolonged heat wave as people seem to find it inconvenient to cook at home or eat out,” a GS 25 official said.

South Korea has been gripped by a heat wave for the past month, with daytime highs soaring well above 30 C.